French Ambassador Etienne de Poncins speaks with Brian Bonner from the Kyiv Post at his residence in Kyiv on Sept. 15, 2020. 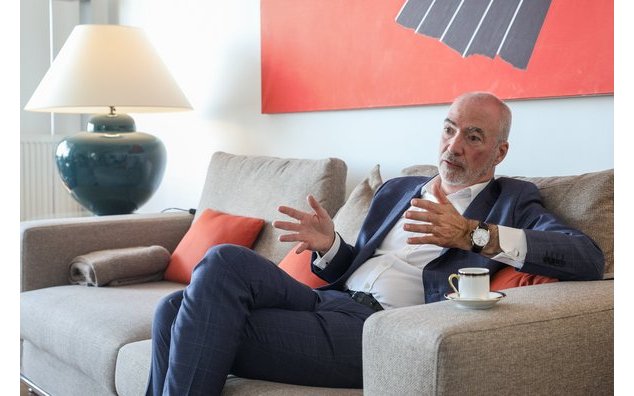 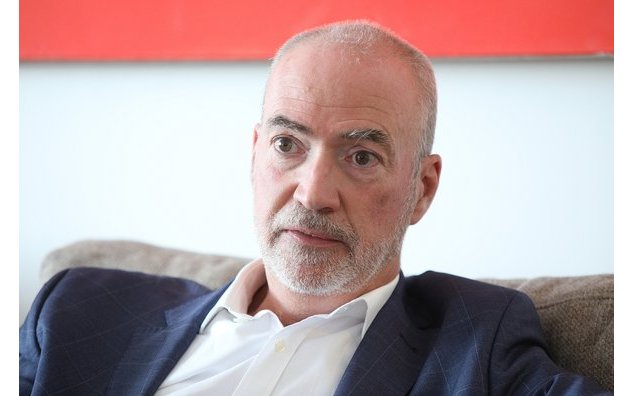 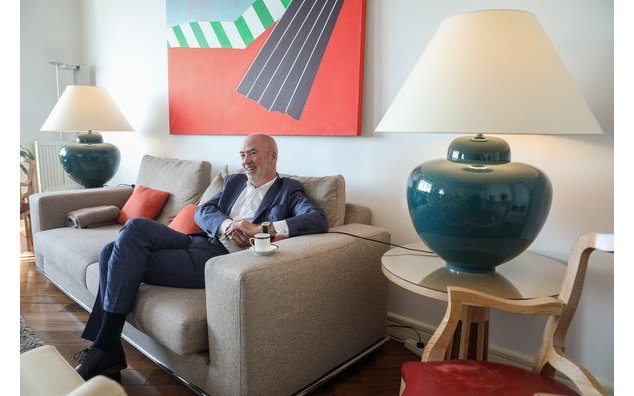 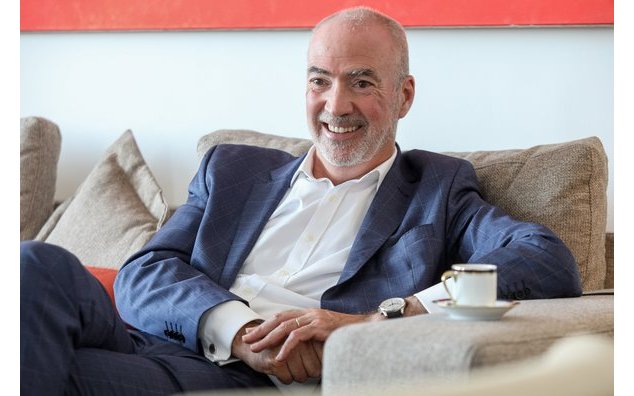 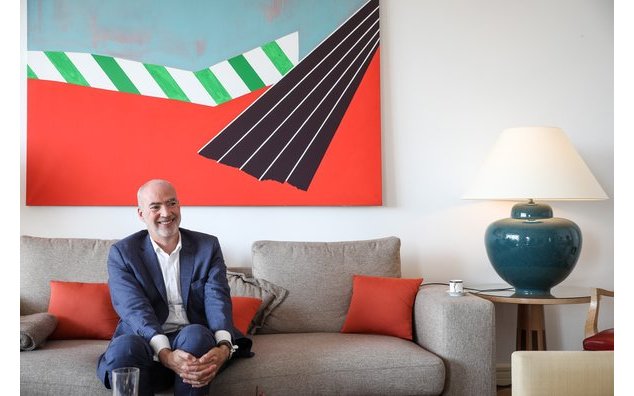 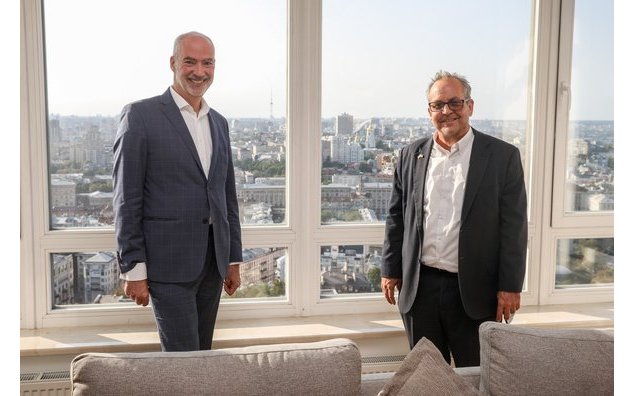 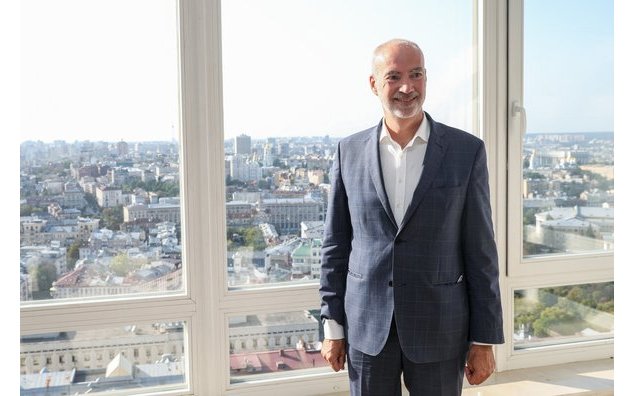 Etienne de Poncins spent his entire childhood on the same street in Paris, near the Eiffel Tower, and never traveled by airplane until he was age 20.

But he has more than made up for it in the decades since. He has worked in or visited all major European capitals in his 30-year diplomatic career. He’s served as ambassador to Bulgaria, Kenya and Somalia, and, for the last year, in Ukraine.

“Children want to do differently from parents,” de Poncins said in an interview with the Kyiv Post on Sept. 15 at the ambassador’s official residence in Kyiv overlooking the Dnipro River. His desire to “do the opposite” from his stay-in-the-same-place parents, who were businesspeople, led him ultimately to his current mission in Kyiv, where he can be expected to be stationed at least two more years.

“I just wanted to see the world,” he explained of his career choice, noting that his three adult children won’t be following in his footsteps. “None of them want to be diplomats.”

Ukraine has been a relatively easy and enjoyable fit for de Poncins thus far. He finds the street life to be vibrant yet safe. “It’s easy to live here,” he said. “I walk to my office. It’s a real privilege, to see all the people on the street.”

When he arrived a year ago, Ukrainian President Volodymyr Zelensky was still riding a wave of strong popular support. Three months after his landslide victory for president, his Servant of the People party won full control of parliament in the July 2019 elections. People were wondering whether Zelensky’s “turbo regime” was moving too fast in changing Ukraine.

That is no longer the case today.

Zelensky’s support has plummeted. He’s fired many pro-Western reformers. His ruling party of 248 lawmakers in the 422-member body lacks unity. And, most troubling of all, Zelensky has failed to bring rule of law or clean up the corrupt courts. Some don’t see him as even trying.

“When I arrived, there was real momentum and the sense of reform with young people in government – a young president, a young prime minister,” de Poncins said. “Now the picture is less rosy. Of course, the coronavirus has changed the landscape. But even without that, since February-March, the mood has changed and not for the good. We are in a different period.”

He said “it’s difficult to interpret” what happened. “We just see the consequences.”

Now he and his G7 colleagues – the ambassadors of the United States, Italy, Germany, Canada, Japan, and the United Kingdom – are worried about a faltering corruption fight in Ukraine. Among their worries are the political and judicial attacks on the National Anti-Corruption Bureau of Ukraine, one of the anti-corruption law enforcement bodies established after the EuroMaidan Revolution overthrew Kremlin-backed President Viktor Yanukovych in 2014.

“Reform of the judiciary is the key issue. This country will not express its potential if there is no trusted judiciary in place. Where are we now ? Nowhere. We are still talking about this reform and draft laws.”

Ukraine will pay the price, certainly as the 42 million people continue to experience injustice, but also because the International Monetary Fund and the European Union, which gets 15 percent of its budget from France, make judicial reform a condition of financial assistance.

“It’s difficult and arduous and someone has to take charge of it,” de Poncins said, implying that nobody is doing so now.

While de Poncins, as the representative of a powerful nation of 67 million people, has regular access to top-level officials, including Zelensky, he’s not sure how much of the rule-of-law message is sinking in.

“Do they listen to us ? Yeah, from time to time, but not all the time,” the ambassador said. “It’s not up to us to make reforms, it’s up to the Rada,” he said, referring to Ukraine’s parliament.

On the bright side, he cites banking reform legislation designed to prevent the sector from collapsing as it did in the last decade, costing taxpayers $20 billion after years of unpunished insider lending and bank fraud because of poor regulation and corruption.

He also hails the start of an agricultural land market which could lead to greater investment in the economy’s dominant sector.

De Poncins also cites the decentralization of taxpayer money and power to regional cities, towns, and villages in the positive category. While COVID-19 has slowed travel, he’s managed to visit many key cities, including Lviv, Kharkiv, Lutsk, and Mariupol, the Azov Sea port city that is home to nearly 500,000 people and 775 kilometers southeast of Kyiv. “The country is very diverse and different from the west to the east,” he said.

In Mariupol, France is helping with financing to create a safe, modern and reliable drinking water supply system. The city is dangerously dependent on water supplies in Russia-controlled areas, but soon “they will have their own supply system. It’s a demonstration to the population that life can change for the better.”

In terms of high-level visits, French President Emmanuel Macron has agreed to visit Ukraine but has not set a date.

“The question is not if, the question is when,” Poncins said. “He has established a very good personal relationship with Zelensky. They are of the same generation. There are a lot of political similarities between Zelensky’s Servant of the People party and the French president’s party En Marche.”

Some notable business deals have taken place in the last two years between France and Ukraine.

Combined with the Mariupol water system, the helicopters and patrol boats amount to projects worth 750 million euros, a mix of financing that includes French government and commercial loans backed by bpi France investment bank.

De Poncins is also hoping that Ukraine will take a hard look at another slate of projects worth 800 million euros.

— French electrical locomotives made by the Alstom company ;

In a big relief, de Poncins says that the French business community reports less harassment from government officials than in the past, when illegal raider attacks and pressure for bribes were frequent. “The situation has improved,” he said. “There are no big problems.”

France, of course, plays a key role in Ukraine’s future by sharing – with Germany – the role as mediator in the four-country Normandy format of peace talks, including Ukraine and Russia.

“Maybe it’s not the best tool, but at least it works,” de Poncins said. “We are still confident that we can achieve something good with it.” He believes France’s efforts, along with Western economic sanctions, have slowed Russia’s six-year war against Ukraine, led to prolonged periods of cease-fire, and achieved prisoner exchanges.

But the talks have not ended Russia’s war, which has killed 14,000 people, nor have they forced the Kremlin to withdraw from the eastern Donbas or the Crimean peninsula that Vladimir Putin seized with military force in 2014.

He sounded skeptical about tougher economic and other sanctions against Russia. “You think it will work ?” he asked. “The sanctions that exist, we have to keep them, but their impact is really difficult to assess.”

One of the countless casualties of the coronavirus pandemic was the cancellation of French Spring in Ukraine, a popular cultural festival of music, movies, art, and more. But just wait until 2021. “I can promise that next spring will be great,” he said.

The coronavirus also forced language lessons and other courses offered by the French Institute in Kyiv to go online, but now the Gonchara Street institution is recovering, he said, with a mix of classes online and in person.

Also during his watch, Ukraine joined the Biarritz Partnership for Gender Equality, a French-led initiative when it held the rotating presidency of the G7 group of democracies in 2019. Ukraine has pledged to focus on reducing domestic violence and raising salaries for women, but these are voluntary goals.

De Poncins works closely with Ukrainian Interior Minister Arsen Avakov, one of the most powerful and controversial officials in government, dogged by corruption allegations that he denies.

Avakov chairs the Ukrainian side of a bilateral economic commission, while the French side is led by Economy Minister Bruno Le Maire.

In contrast to many in civil society who believe that Avakov – the longest-serving minister in the Cabinet today — should resign for ineffectiveness, corruption and obstructing reforms, de Poncins sees the nation’s top cop in a far more favorable light.

“He has a very strong political weight and influence,” the French ambassador said. “I think he’s a very good professional. He’s committed to reform. He’s someone we can discuss with. He sticks to his word. He’s there and he delivers. We have a good professional relationship.”